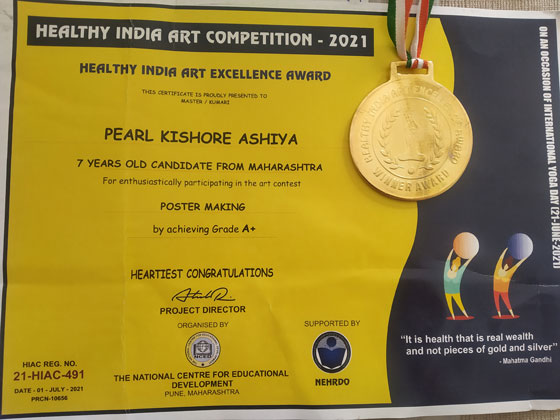 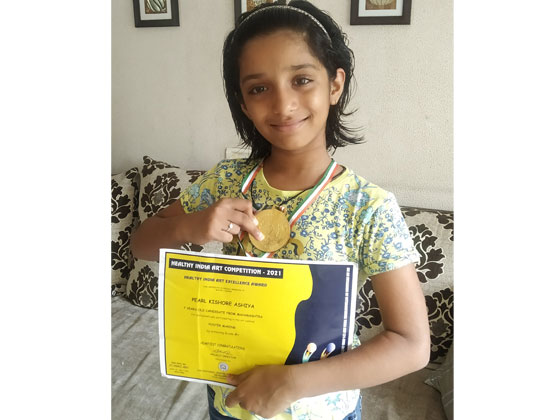 Hearty congratulation to our student Pearl Ashiya of class 2B she won Gold medal in National level competition, Healthy India Art Competition-2021 in Poster making. This competition is organised by National Education and Human Resource Development Organisation and National Centre for Educational Development. 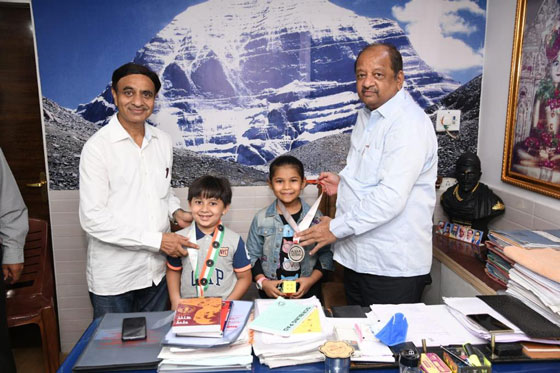 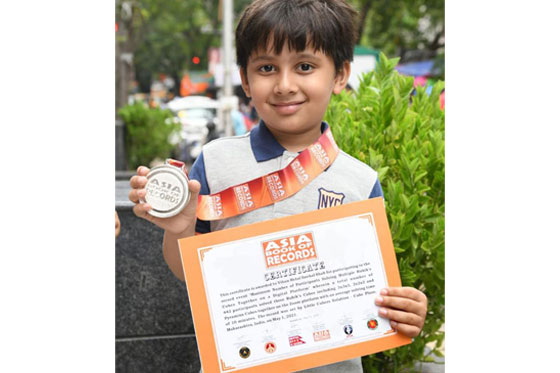 This event also had Maximum young participants (440) out of which Vihan was the achiever. His picture with the Member of parliament, Shri Gopal Shetty – who is also a parent of DPGA. 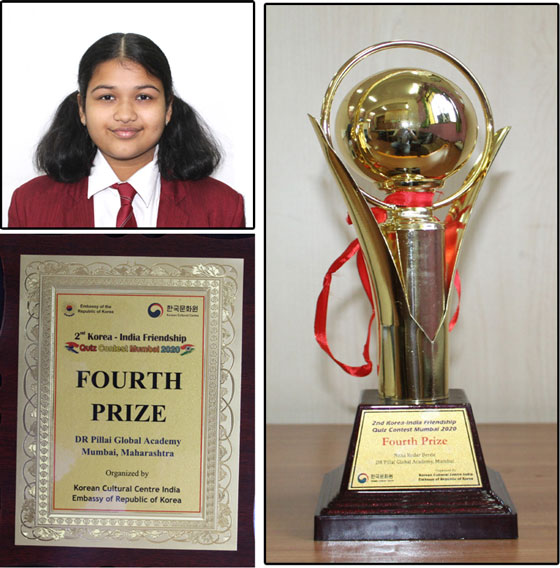 Congratulations to our student Ms. Nitsa K. Berde for winning the 2nd Korea – India Friendship Quiz Contest. This event was organized by the Korean Cultural Centre India. Embassy of Republic of Korea. We wish Nitsa continued success in all her future endeavours. 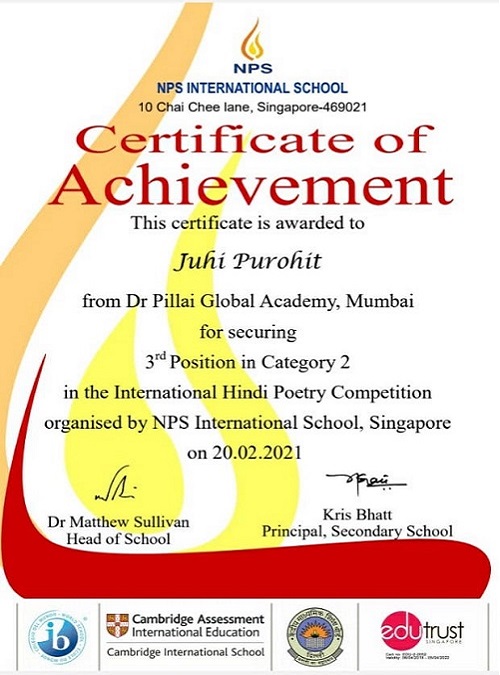 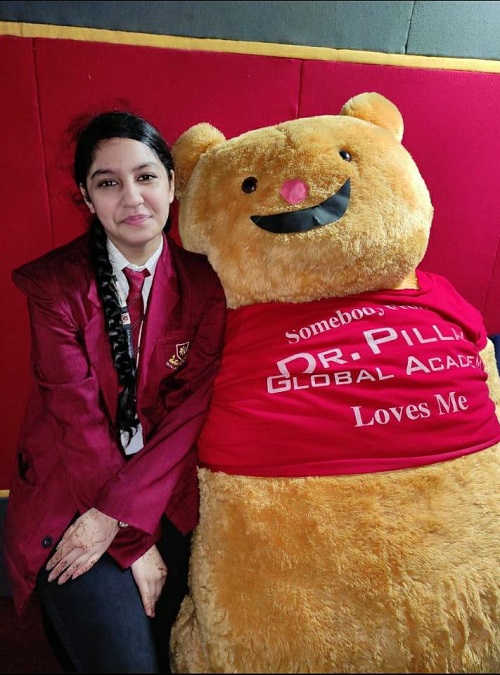 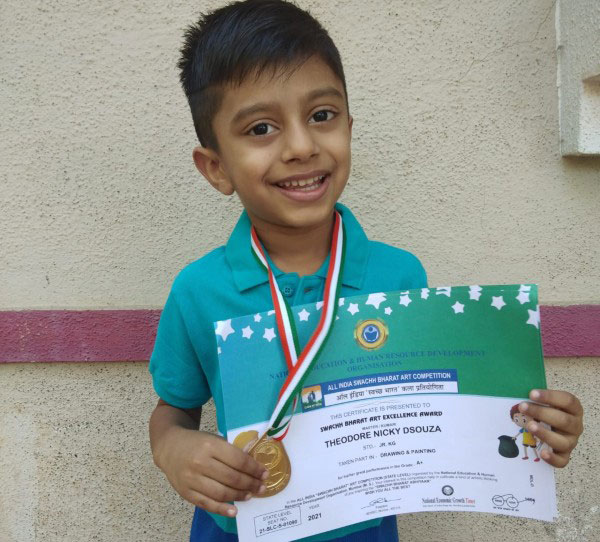 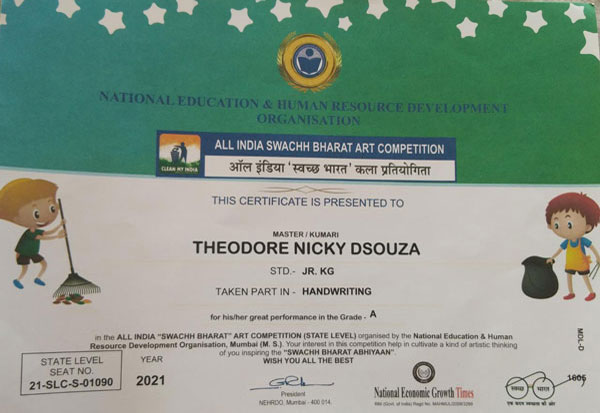 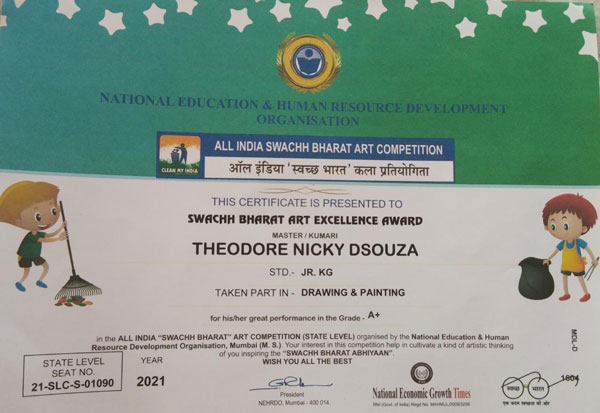 After winning the State Level Gold Championship in the ‘All India Swachh Bharat Art Competition’, our student Theodore D’souza from Early Years Middle C has now been selected for the National Level competition. Based on the theme, the selection was carried out by the “National Education and Human Resource Development Organisation” for the ‘National Level Competition of All India “SWACHH BHARAT” Art Competition’ for the year 2021.

We are all so proud of you. 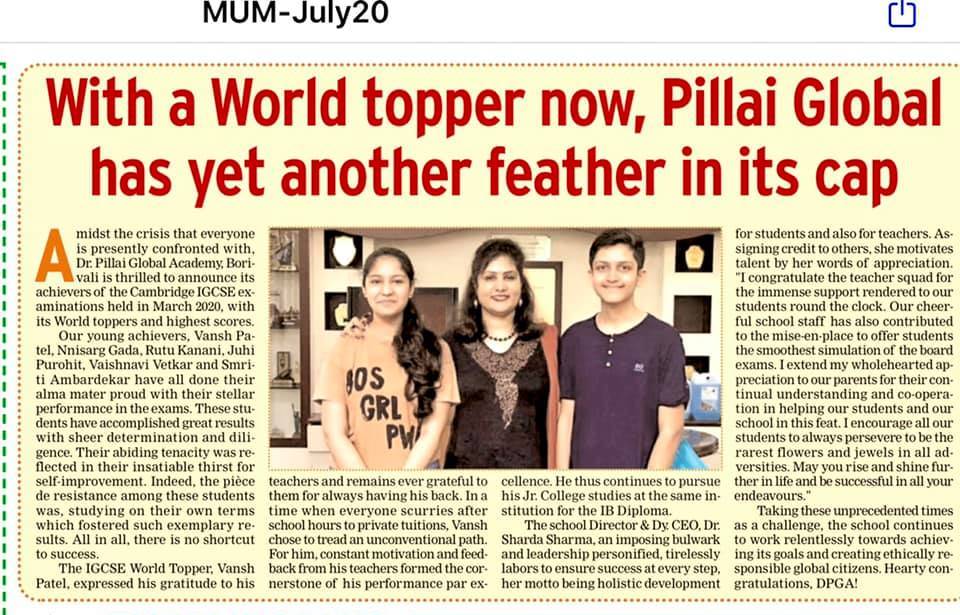 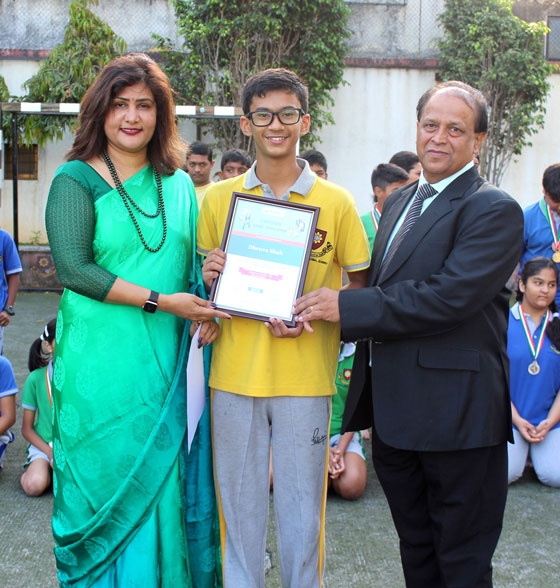 We at DPGA are delighted to share that our student of Grade 8 Dhruva Shah is the youngest kid in the world to become a WhiteHat Jr. Certified Game Developer. WhiteHat is an organisation by the alumni of Google, Microsoft, Amazon, Intel and discovery. Dhruva has been awarded for his exceptional skills and outcomes in game development with deep UI/UX interface. WhiteHat has congratulated the school for playing a pivotal part in Dhruv’s success and for the school’s incredibly thorough grounding in logic and design principles. Hearty congratulations to Dhruva and his family too. We are proud of him. We wish him all the success in all his future endeavours!

Hearty congratulations to our grade 9 student, Pooja Valotia, who has won the ‘Youngest achiever’ jury award at the national Chetak festival for her art work- horse sculpture. Proud of Pooja, her parents and our art teachers. 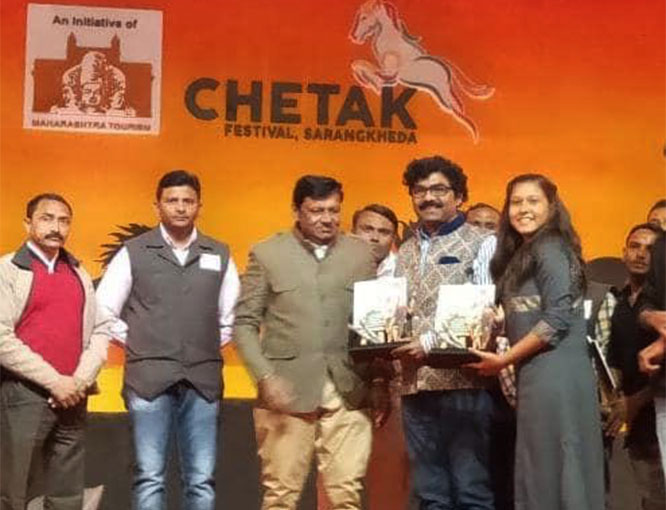 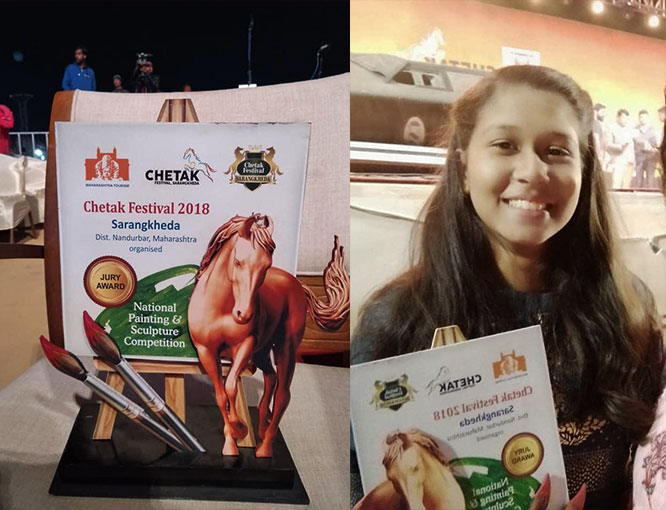 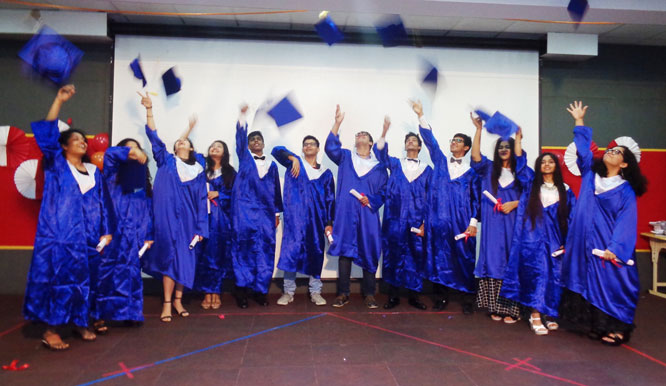 Jiyaan Mehta has made the DPGA community proud with a series of achievements mentioned below:

We, at DPGA are proud of you Jiyaan and we wish you all the best in your future endeavours. 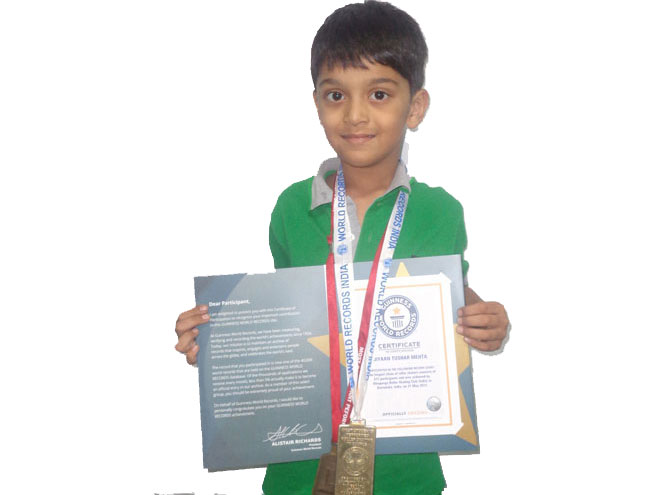 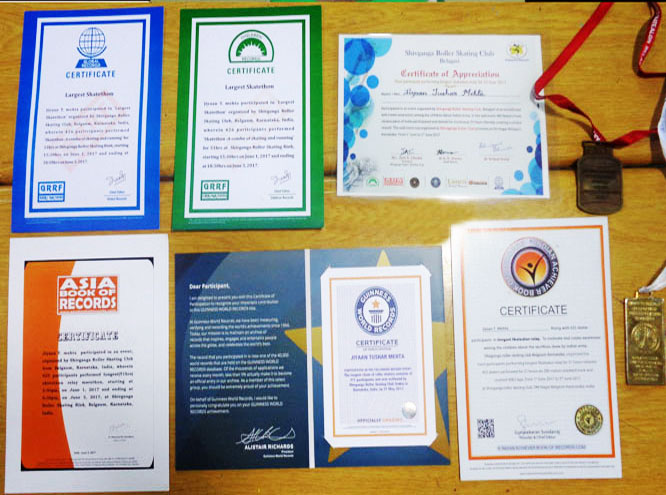 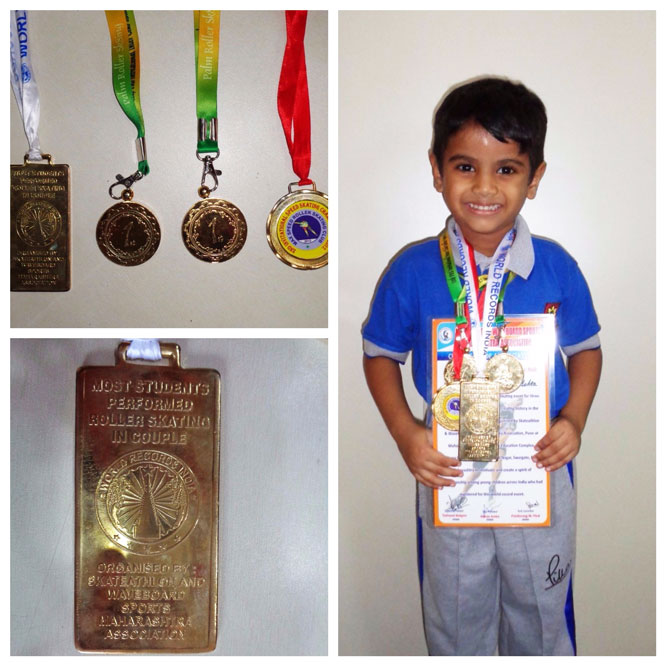 Participated in the record breaking skating event for three hours on 20th August, 2017 at Maharashtra Madal Sports & Education Complex, Pune organized by Skateathlon and Waveboard Sports Maharashtra Association. He has qualified for the next level, the event for which will be held on 20th October, 2017 in Karnataka.

We wish him all the best & look forward to seeing him achieve the accolades.

Aarav’s name is now in the “GUINNESS BOOK OF WORLD RECORDS” in the category of ‘Record breaking events’ all over the world. 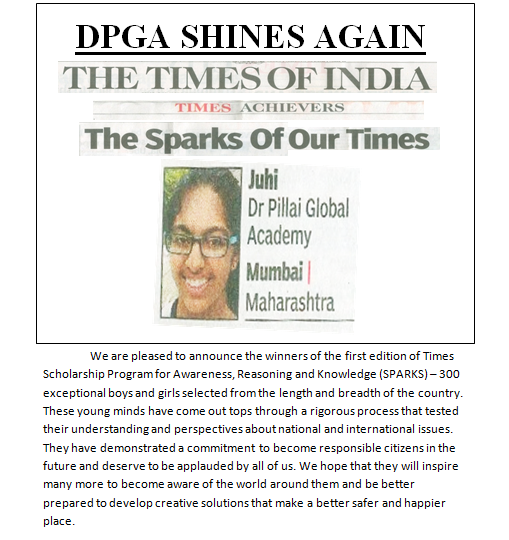 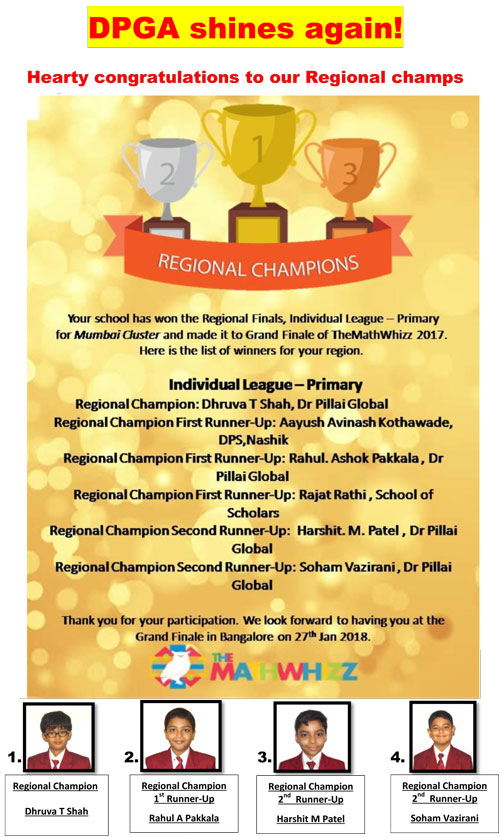 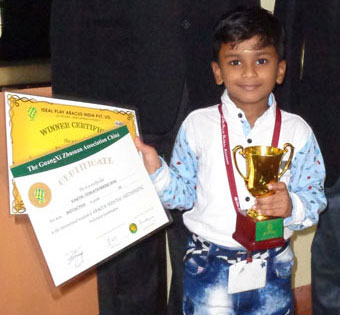 Karthik Dogi from Grade 1-D has got a distinction in grade IX International Standard of Abacus Mental Arithmetic Proficiency Exam.

He has also bagged a place in EL 1 level in the 12th National Level Abacus and Mental Arithmetic Competition held at Bangalore on 29th January, 2017.

We are proud of his achievements and we wish Karthik Dogi success in all his future endeavours.

We are proud to announce the achievements of our students from Early Years Lowers, Master Hridaan Shah and Master Vihaan Shah. They have not only qualified at the Preschool and Inter School Championships with an ‘A’ grade, but Hridaan has also participated at the National level and was honoured with a trophy.

We congratulate our students and we wish them success in all their future endeavours. 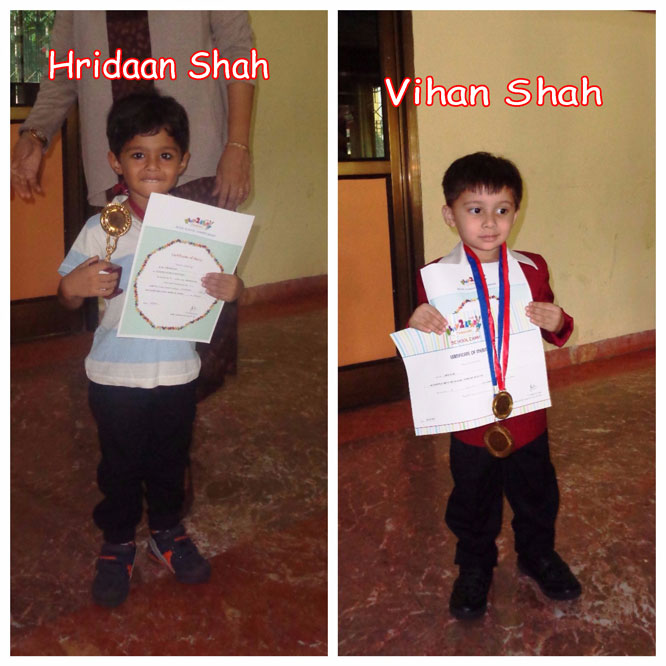 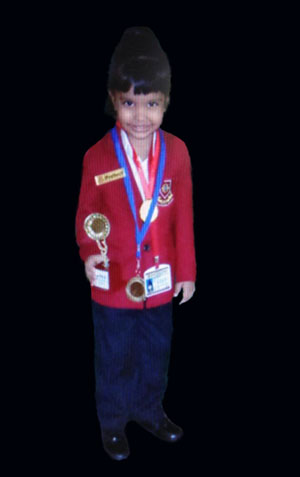 Ms. Anaisha Mehta from Early Years Lowers was felicitated by Dr. Sharda Sharma in school, for having won 2 medals and 1 trophy in various levels of Marrs Play2Learn Exam.

Anaisha has won 2 medals in Marrs Play2Learn exam at Playgroup Level and interschool level. It is a matter of pride that she has qualified for interstate level. Having cleared that, she has given National level prelims exam in August 2017. She has received a trophy for having reached this level. Structured in the form of exciting rounds (oral, written and activities) Play2Learn carnival gives an opportunity to be spontaneous while the child’s natural abilities are evaluated.

We, at Dr. Pillai Global Academy, are proud of Anaisha and we wish her all the best as she endeavours to achieve nothing, but the best.

We at DPGA – Borivali, take pride in announcing that our IBDP XI student Mr. Jeet Patel has won the International Championship in Chess Boxing against Russia in the finals. 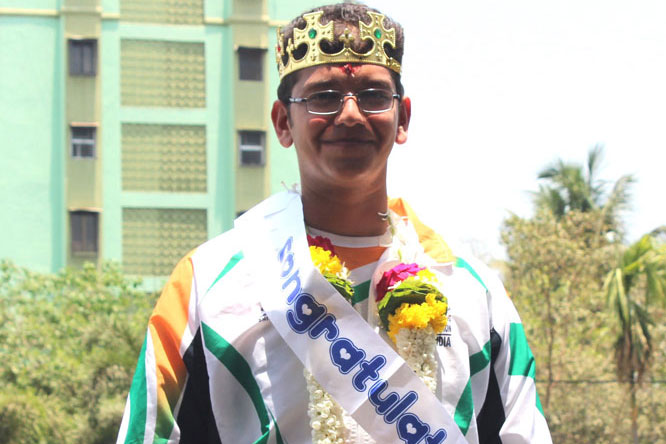 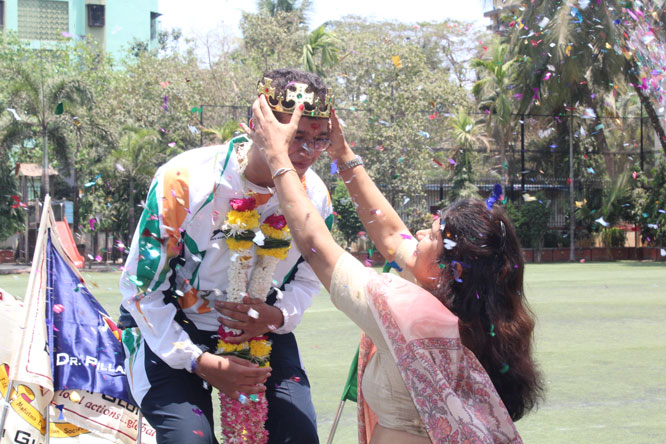 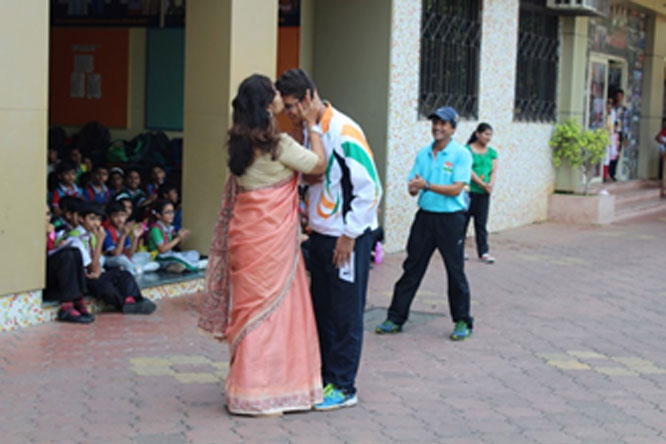 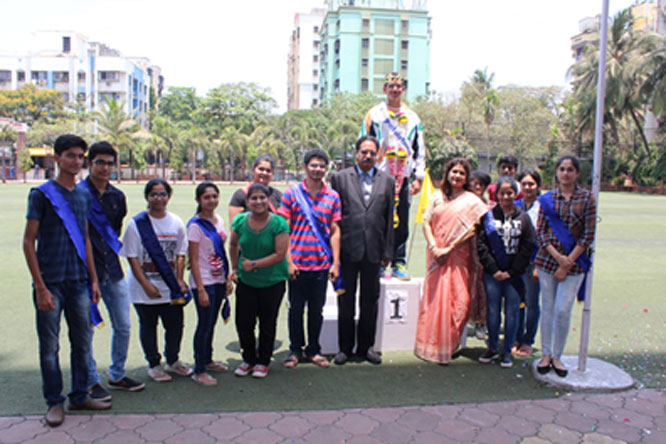 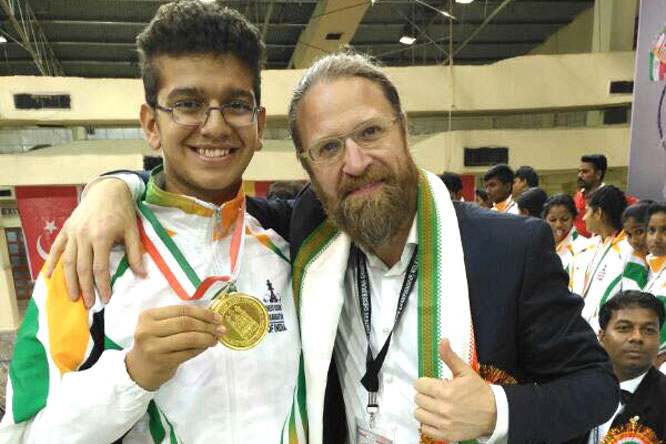 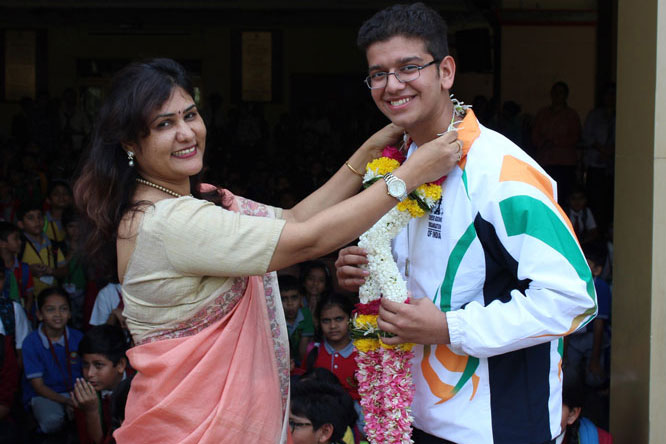 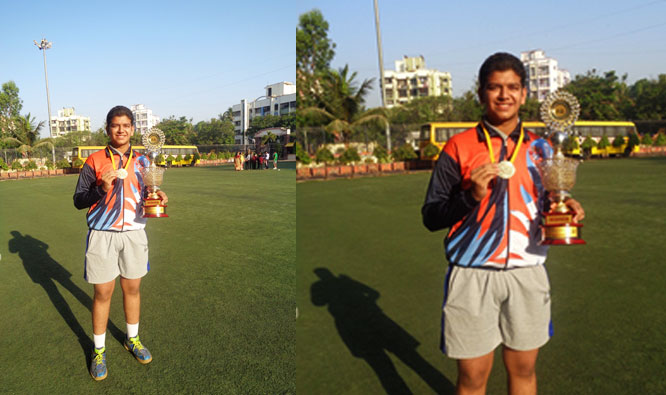 We at DPGA – Borivali are proud to announce that our IBDP XI student Mr. Jeet Patel has won National Championship in Boxing.

Qualified for the World Chess Boxing Championship 2017 representing India; to be held in April 2017.

We wish him all the best for the upcoming championship.

You may send your wishes and blessings directly to Jeet on his email address & motivate him.